“La Toya (his sister, red.) and I are very different, (…). She doesn’t understand what I see in ‘Star Wars’, ‘Close Encounters’ or ‘Jaws’. Our tastes are miles apart.“ – Michael Jackson in ‘Moonwalk’

“George Lucas told me his daughter’s first words were ‘Michael Jackson’. I felt on top of the world when he told me that.” – Michael Jackson in ‘Moonwalk’

“The Cosmos and the universe of good and evil where a small group struggles to bring freedom to the countless worlds of despair; a rag-tag band led by the infamous Captain EO”.
Thus starts the 3D short movie cooperation between Disney, George Lucas, Francis Ford Coppola and Michael Jackson. The popular 3D gig was shown in Disney parks between 1986 until 1998. 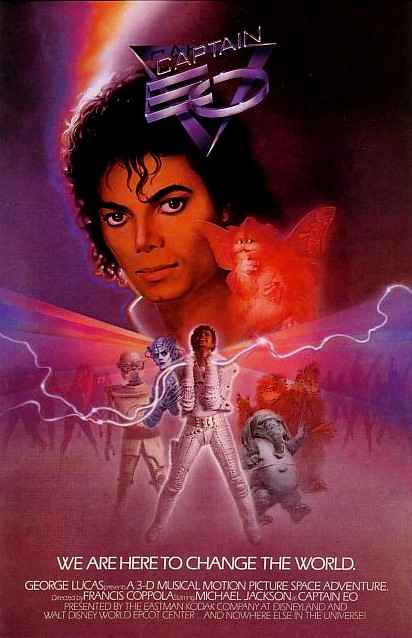 The mega success of Michael Jackson in the eighties got Disney’s attention and they desired to build an attraction about the King of Pop. In this period, Disney still had to make its grand comeback with
‘The Little Mermaid’ and several other excellent movies, so there were looking towards external movies (‘Star Wars’) and characters to make new exciting attractions in their themeparks.

Jackson was free to do whatever he wanted, as long as it was to be creative. Jackson, himself a big fan of Disney, had studied Walt Disney’s past and wanted to deliver something that Walt would have liked. Disney proposed a movie and Jackson agreed if he could work with George Lucas and Steven Spielberg. Because Spielberg was busy at the time, Lucas proposed his former mentor Francis Ford Coppola. Kodak would sponsor the movie in league with Disney. Kodak would benefit from the project in order to promote their new 70mm 3D process. Disney constructed ‘Magic Eye Theaters’ for the attraction with 700 seats and with added laser- and smoke effects.

Jackson visited Skywalker Ranch to discuss the storyline with Lucas. Both agreed easily that it was to be a science fiction story that could benefit from the most modern special effects. Lucas came up with the name Captain EO (Eos being Greek for ‘dawn’) and Jackson wrote two songs for the movie: “We are here to change the world” and “Another part of me”. The first song got finally released on ‘The Ultimate Collection’ in 2004. The second song was released on the album ‘Bad’ and reached number 8 in the top 40. James Horner (‘Titanic’, ‘Willow’) lent his skills for the soundtrack. 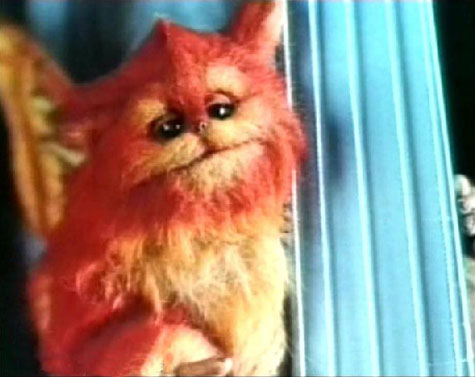 Captain EO is a young adventurer who is supposed to bring peace to a planet that is being suppressed by an evil queen ruler (Anjelica Huston). EO’s commander is Commander Bog (Dick Shawn). EO sidekicks include the flying Fuzzball, The Geex (an alien with three legs and two heads: Idy and Ody), Hooter and the robotic duo Major and Minor Domo. The Geex was specially recruited for this mission because EO thought an extra crewmember was needed and that even in space two heads are better than one.

When EO finally reaches their destination they fall under attack from patrol cruisers. The can evade the enemy fire but crash on the surface. Since Hooter has eaten the map, they have no idea where they are. Guards immediately surround EO and his crew so it seems they have landed in the right place after all. The evil queen ruler, who looks like a metallic spiderlike witch, convicts EO to severe punishments. EO apologises but wishes to present her with a gift before his punishment begins. EO asks her not only to see the gift but listen to it as well. Major and Minor turn into a drum and guitar that are being used by Hooter and The Geex. De queen sees what’s happening and orders her guards to intervene but EO’s power turn them into dancers. The queen then sends her whip warriors who are far stronger than the regular guards. The warriors corner EO but Fuzzball saves the day and EO can transform the warriors into allies as well. When all her guards are defeated, the queen is without a proper defence. EO uses all his power and turns her into a beautiful woman. The metallic environment of her fortress and the planet transform into a lush paradise. EO’s mission is a huge success. 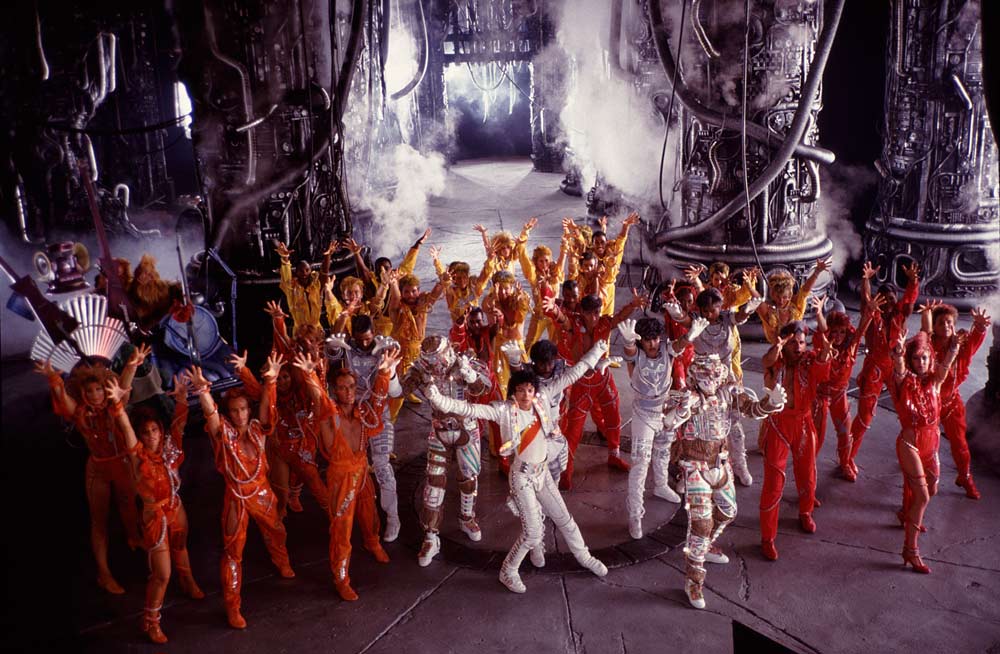 Captain EO premiered at 12 September 1986 in Epcot in Florida. About 220 celebrities were invited and the guest list included Jane Fonda, Jack Nicholson, OJ Simpson and families and friends from Lucas and Coppola. Jackson’s family was present as well but Michael didn’t show up. Some say he was disguised as one of the guests but nevertheless Disney was quite upset. The audiences loved the movie but the critics were disappointed because Lucas and Coppola didn’t do any better than this movie. Some critics uttered the idea that the project was an idea of three has-beens to make their return. Jackon’s album ‘Bad’ was postponed, Lucas’ recent movies were not very successful (‘Howard the Duck’) and Coppola had been out of the picture for a while.

Captain EO is only 17 minutes long and with a cost of 17 to 30 million $ it’s probably the most expensive movie ever created. A ‘making of’ was also produced and presented by Whoopi Goldberg. ‘The Making of Captain EO’ was broadcasted on May 15 1988 as a promotion for the attraction.

In 1994 Captain EO disappeared in Epcot and the other Disney parks followed (Disney Resort Paris was the last one in 1998). EO was replaced by ‘Honey, I shrunk the audience’. Reasons for the disappearance of EO include the fact that the special effects had become too old but the fact that Jackson was accused for the first time in 1993 of sexual harassment may have been the main reason. One can understand that this was not at all to the liking of Disney. 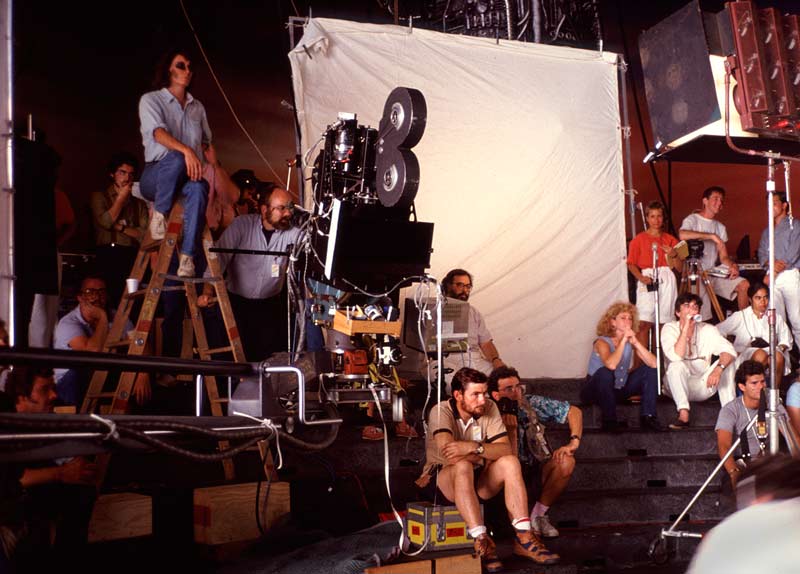 Of course there was merchandising for Captain EO but not in the amount that one would expect from a combined effort from Lucas, Disney and Jackson. There are a few pins, several caps, some posters, stuffed creatures (Fuzzball, The Geex and Hooter), some pvc figures, t-shirts, keychains, wristwatches and a 3D comic. There never has been an official release of Captain EO or ‘The Making of Captain EO’ on any format, though many bootlegs can be found online. 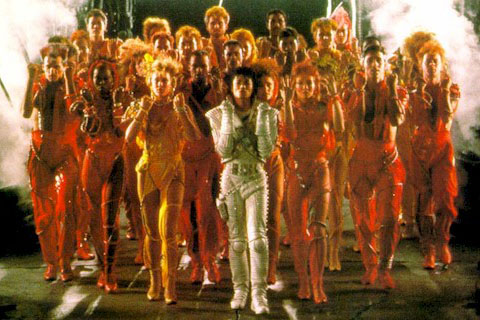 There seem to be more similarities between EO and the Star Wars universe than the opening sentence (“The Cosmos and the universe of good and evil where a small group struggles to bring freedom to the countless worlds of despair”). By judging the first part of the movie, EO could even be a ‘Star Wars’-spin-off.

* The Galaxy: The Galaxy in EO looks like the galaxy in Star Wars with a lot of stars, asteroids and a nebula like region (as seen at the end of ‘The Empire Strikes Back’).

And what about the Illumgrids seen in the cockpit of the ship? They look a lot like the lights inside the Death Star. The planet where EO’s crew crashes seems to look like another Death Star trench. Holograms and homing beacons are also known in the universe of Captain EO.

And at last we have Major and Minor Domo who may remind you of Bollux (BLX-5) and Blue Max from the Han Solo trilogy of Brian Daley. Just like Minor Domo, Blue Max could fit inside his larger counterpart.

* Hooter and Idy / Ody may look weird but don’t they remind us of an Ortolan (Max Rebo) and a Troig (Fode / Beed)?

* Some scenes from EO look a lot like scenes from Star Wars: EO’s ship makes a trench run on the planet and flies through constructions that look familiar to those seen on the surface of the Death Star in ‘Return of the Jedi’. EO makes two ships crash who are pursuing him. He sure studied Han Solo because the Corellian did the same after the Battle of Hoth with two TIE Fighters in the Hoth Asteroid Field.

Some other links between Jackson and Star Wars 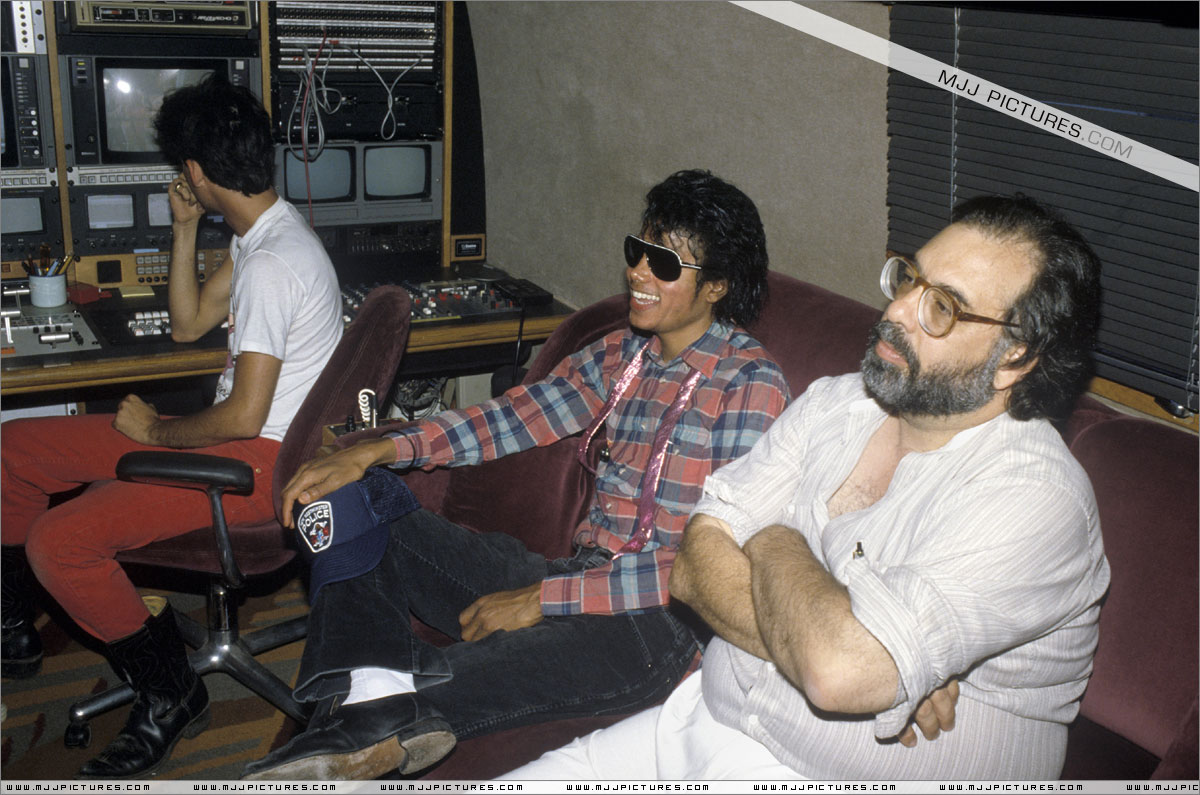 EO was recorded in May 1985 in the Laird Studios in LA.

Conceptual artists from Disney, such as Lance Anderson, designed the characters under supervision of George Lucas.

Though we may be surprised that Coppola directed this musical, he did in fact direct several musicals earlier in his career, such as ‘Finian’s Rainbow’ and ‘The Cotton Club’. Rumours say that Coppola didn’t really do a lot on Captain EO.

Michael created the choreography together with Jeffrey Hornaday (‘Flashdance’). The style from ‘Thriller’ was combined with the famous Moonwalk.

Rick Baker first created the queen’s costume. Shelley Duvall (‘The Shining’) was first cast as the queen but she refused to wear the costume because it made her look totally unrecognisable. Anjelica Huston, who was cast after Duvall left the project, refused to wear it as well. Coppola then asked Tom and Bari Burman (‘The Goonies’) to create another outfit that looked like the monster from alien created by Giger. Huston liked the outfit but Lucas didn’t.

Tony Cox, who played Hooter, wasn’t unfamiliar with Lucasfilm. He was an Ewok in ‘Return of the Jedi’ and ‘Caravan of Courage’ and was also in ‘Willow’. The suit was very heavy (6 kilogram) but he was very excited to work with Michael. 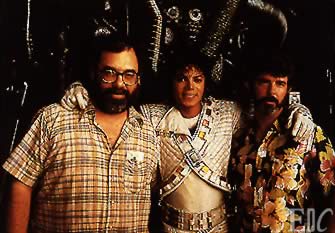