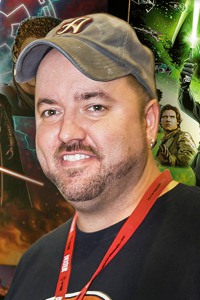 1. What is your first Star Wars memory?
My first memory was actually seeing the film in Summer of 1977. I was just barely four years old at the time. I distinctly remember being scared out of my mind by Darth Vader’s first appearance on the Blockade Runner through the smoke of the blaster battle surrounded by stormtroopers. He was just so scary to me, I thought he was a demon or some kind of monster, I really wanted to hide under my seat!

2. What is the first item of SW you ever received?
The very first ‘Star Wars’-item I received was the Giant Sized Treasury Edition of ‘Star Wars #1’ from Marvel Comics on my birthday in July of 1977. I remember my mom picking me up from a friend’s house whose mom was babysitting me and when I climbed in the car it was sitting on the dashboard waiting for me. I was so excited because she knew I had really loved the movie. That really started it all for me. It’s been all downhill ever since.

3. Name one memory that you have about the Kenner toys.
I remember coming down the stairs from my bedroom every Christmas from 1978 to 1983 and having so many ‘Star Wars’-toys under the tree from my mom and dad that they just couldn’t wrap them all. I was just so blown away each Christmas morning and so happy as a kid during those years. The ‘Star Wars’-presents that were unwrapped were apparently from Santa I was told. 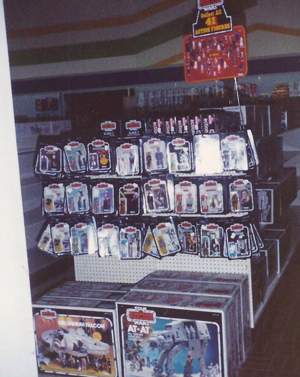 4. Name one memory that you have that is not linked to the Kenner toys.
One of my fondest memories is probably playing ‘Star Wars’ in the backyard with my friends and pretending that I was Luke Skywalker. We’d play ‘lightsabers’ with broom handles or large sticks from the tree in the backyard.

5. How did you ‘endure’ the period when ‘Star Wars’ wasn’t really that popular anymore as a fan?
Honestly, it didn’t really effect me that much because I had stayed a pretty diehard fan during those years. For a little while, ‘G.I.-Joe’ and ‘Transformers’ dominated my childhood around, 1983-84, when I stopped collecting and playing with the toys but I was still reading the Marvel Comics and then a few years later I got hooked on the Star Wars Role-Playing Game from West End Games. But what really kept me going was when VHS technology came out and I had recorded ‘Star Wars’ from HBO. I’d watch it almost every day just before or after school. Then I’d pick up in the movie where I left off the next day. I did the same thing with the other films in the trilogy eventually and also the ‘Indiana Jones’-films once I had those available on VHS. So even during those “dark times” when ‘Star Wars’ dropped off the radar for the larger masses I was still embracing it and living it almost every day. It was still a pretty big deal in my life.